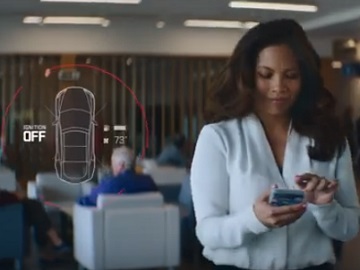 Spectrum has released a new commercial, introducing Spectrum Mobile as “a network built for the way you use your phones today and the way you’ll use them tomorrow”.

“Why did we create Spectrum Mobile? Well, because we think you deserve a network that was built for you. So for the explorers, we’ve got America’s largest 4G LTE network. For streamers, a nationwide network of WiFi hotspots. For jugglers, free talk and free text. There’s unlimited for the all-nighters. And for carpoolers, you can pay as you go. For gadget lovers, we have it all. For for just about everyone, more savings. For the strollers, the leapers, the space travelers, the daredevils, for those desperately in need of help, for those still waiting for something better, for the way you use your phones now and the way you’ll use them tomorrow,” Ellen Degeneres says in voiceover on the 60-second spot, which features a diverse cast illustrating these categories, from explorers to carpoolers to gadget lovers and more.

At the end of the ad, Ellen says the tagline “The Best Network. The Best Devices. The Best Value”.

This year, the number of celebrities providing their voice in commercials is not small at all. Queen Latifah has served as voiceover in spots for Girls Scout, AT&T and DIRECTV, Benedict Cumberbatch in a spot for UPMC (Living Liver Donor Transplants) Healthcare Provider, Vin Diesel in a spot for Dodge, Matthew McConaughey in a spot for Carl’s Jr., and Albert Brooks in a spot for E-TRADE.