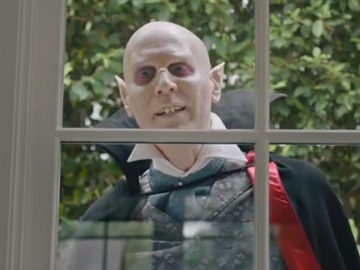 After highlighting, in several previous commercials, that DIRECTV is “BAD”, Spectrum is not targeting T-Mobile and Sling TV, stating, in two new ads, that these companies are “BAD”, nodding at their “confusing deals with catches” and “limited TV packages”.

The spot dedicated to Sling TV highlights that “Choosing Sling TV has consequences, like missing out on ESPN, or watching the game from outside a window, in a bush.” Titled “Uninvited Guest,” the 30-second video features Gary, a ventriloquist’s puppet, and the Grim Reaper watching a football game at Gary’s place, when Mr. Vampire shows up at the window, begging for them to let him in. Gary, who’s holding the remote control, asks the Vampire to go watch the game at his own house, which makes the latter reveal he can’t do that because he doesn’t have ESPN. “How do you not have ESPN?” Death asks him surprised to find out such a thing. The Vampire then says he has Sling TV’s Blue Package and there’s no ESPN. Even though he added the sports extra package, he still doesn’t have ESPN, he also reveals. His request to Gary to open the door is met with a refusal, with the justification that he’s a jinx. He tries to deny that, but what happens next seems to be the result of him jinxing.

“Limited TV packages are evil. Spectrum makes it easy. Sling TV Bad. Spectrum Good,” the voiceover says at the end of the commercial.

Developed by creative agency Something Different and launched in April 2017, the “Monsters” campaign also features a mad scientist, Mr. Werewolf and Mrs. Werewolf, and a Vampire family. Other spots tackle, instead, issues like service disruptions, deceptive pricing and the lack of channels and features. So far, things like complicated Video on Demand, automatic service charges, slow internet, and others have been described as evil, and DIRECTV has been presented as “Bad” while Spectrum as “Good”.

Launched earlier this year by Charter, Spectrum Mobile offers unlimited or by the gigabyte data plans on “the nation’s largest, most reliable LTE network,” plus a nationwide network of WiFi hotspots, allowing customers to pick the monthly LTE data option that’s right for them: By the Gig, which costs $14/GB and lets customers pay for the GB of shared data they use each month, and Unlimited, which costs $45/line and has no monthly data usage limits (but reduced speeds after 20GB). Spectrum Mobile is available to Spectrum Internet customers.