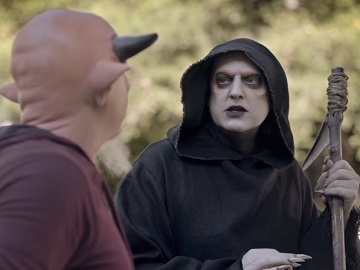 Spectrum’s Monsters are back in a new commercial, trying to solve a problem that affects Demon’s satellite TV signal.

The 30-second spot features the Demon asking Death to “kill” the tree in front of his house, that keeps growing to mess up with his satellite signal. “I figured out you could use a little chopper and help me out.”, he says to the Grim Reaper who replies, offended by the association of his scythe to a chopper, that his tool is “the dark reaper of souls, forged in Hades and cooled in the River Styx.”. “Yeah, it why I called you.”, the Demon says, letting him to do the “job”. Trying to cut the tree off, the Death has a surprise though: “the dark reaper of souls” gets broken and Gary, the ventriloquist’s dummy, who’s been witnessing the whole scene, starts laughing out loud. At this point, the Demon remembers he has a chainsaw and he goes inside to bring it.

“TV that’s blocked by trees is evil. Spectrum is tree-proof.”, the voiceover says at the end of the commercial, which also sees the tagline “Satellite TV Bad. Spectrum Good.” flashing across the screen.

Developed by creative agency Something Different and launched in April 2017, the “Monsters” campaign also features, besides Death, Demon, and Gary, an evil professor, a mummy, and a werewol. In one of the spots, that focuses on service disruptions, they are on a commuter train chatting about their weekend plans and the problem that Death is having on the home front. Other spots, featuring the monsters playing charades and poker, tackle, instead, issues like deceptive pricing and the lack of channels and features.