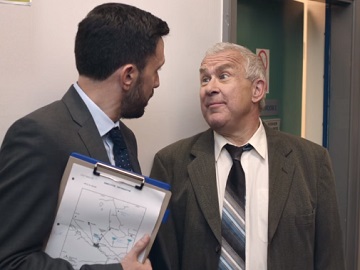 Specsavers has launched an advert featuring the hapless detective that makes a fool of himself by mishearing at crucial points to promote the Specsavers Audiologists.

The 90-second spot, which is a compilation of the company’s “Should’ve” ads, follows the detective as he mumbles his way through his day-job. He takes a guy named Warren to inspect the house of a criminal who wanted to see a warrant, he throws away his burger when his fellow investigator says he thinks a certain guy is a cat burglar, he looks for the inspector in the lav after being told that the latter is in the lab, he grabs one of the exhibits and eats it believing it’s biscuits, instead of getting a suspect’s alibi in the interview room, he gets a lullaby out of him, he’s planning a warehouse rave when he was supposed to plan a warehouse raid, he goes at the Steakhouse when he should actually go to the Statehouse, and this is not all.