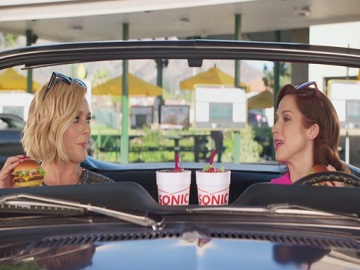 SONIC Drive-In promotes its Signature Slingers, in a new commercial starring Ellie Kemper and Jane Krakowski, aimed at highlighting that a SONIC Signature Slinger is a flavor-packed burger that’s under 350 calories and it can be paired, for a limited time only, with a SONIC Fruit Fizz.

The spot, titled “Getting Away With It”, features Unbreakable Kimmy Schmidt star Ellie Kemper and NBC comedy series 30 Rock star Jane Krakowski in a car at a SONIC Drive-In, talking to each other about how they feel like they’re getting away with something by eating a “juicy, flavorful cheeseburger that’s under 350 calories”. “Are you thinking what I’m thinking?” Kemper asks Krakowski, who proves she’s thinking to something way different, namely to take those burgers, cross the border and change their names. Kemper reveals she was actually thinking about ordering shakes. Seeing the disappointment on her friend’s face, she then adds she’s willing to change their names and starts listing some of the names she would like to have.

The commercial ends with the voiceover urging viewers to “get a flavor-packed burger with none of the guilt” and introducing the new SONIC Signature Slingers, starting at just $1.99.

The new SONIC Signature Slingers, available for a limited time only at participating SONIC Drive-Ins, have patties made with “100% pure beef”, “savory mushrooms”, and “bold seasoning”.

“The Signature Slingers is a first-of-its–kind fast food cheeseburger, which delivers the juicy savory deliciousness you expect from a burger in a way that makes you feel like you’re getting away with something,” said Scott Uehlein, vice president of product innovation and development for SONIC in a press release.

Customers can pair the new Signature Slingers with a SONIC Fruit Fizz for the ultimate lunch, dinner or snack, but only for a limited time.