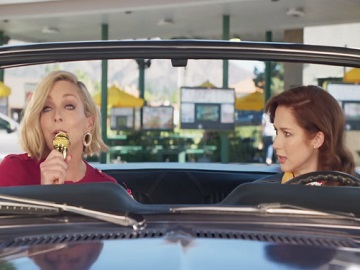 Jane Krakowski says there is a wedding she would kill to go to. It’s not actually a really wedding, though, but a line in her latest commercial for SONIC Drive-In, promoting the Cookie Jar Shakes.

The 49-year-old actress, known for her role in the NBC comedy series 30 Rock, co-stars with Ellie Kemper in a 15-second spot, talking about the Cookie Jar Shakes. When the latter says her Sonic Drive-In Cookie Jar Shake is “like the perfect marriage of Oreo cookies and real ice cream”, Krakowski answers “Now that’s a wedding I would kill to go to!” and starts giving a speech, using a golden microphone, saying she’s known ice cream since college.

The commercial ends with the voiceover urging viewers to get the new real ice cream Cookie Jar Shakes at half-price after 8pm. The deal is available for a limited time only at participating SONIC Drive-Ins.