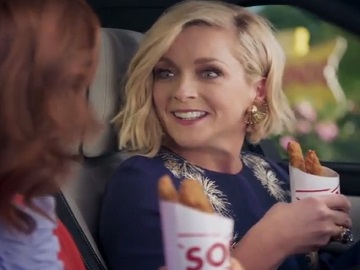 The 30-second spot opens with Ellie telling her friend that “these crispy tenders are so flavorful and crispy”.

Jane confirms and says they are “so flispy,” which is a word made up from flavorful and crispy. She then reveals this is a thing she does where she combines two words to make a cooler word and that she also came up with “labradoodle”.

The commercial ends with the voiceover saying “Nothing beats our new Crispy Tenders, made with 100% all-white-meat chicken and cooked to golden perfection” and inviting people to try them now for $3.99.

The Netflix’s “Unbreakable Kimmy Schimdt” stars have appeared, so far, in several other SONIC ads, part of the improv-heavy campaign from Goodby Silverstein & Partners, pitching products like Cookie Jar Shakes and Sonic Signature Slingers. The comedic duo, tapped to star in six commercials beginning March 2018, have thus joined SONIC’s iconic Two Guys, played by comedians Peter Grosz and T.J. Jagodowski, who have been the drive-in chain’s spokespeople for 15 years.