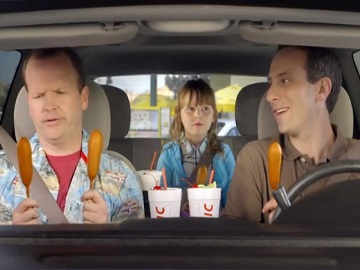 SONIC celebrates End of School Day with 50 cent corn dogs all day on Thursday, May 24th.

The fast-food chain has released a new ad starring its longtime spokesmen, NYC-based former “The Colbert Report” writer Peter Grosz, who sits in the driver’s seat, and Chicago-based improv comedian T.J. Jagodowski, who’s the passenger. This time, the comedic duo have a passenger in the back seat, a little girl. “These corn dogs are such a great way to celebrate national End of School Day,” Grosz says, holding a corn dog. Jagodowski asks the girl, Fiona, if she thought about what she’s going to do when she’s all done with school, and she starts giving an answer that involves going to college and more. However, the kid doesn’t get to end her sentence because Jagodowski discovers there’s a hot dog inside the corn dog.

SONIC’s classic Corn Dog features a hot dog on a stick dipped in sweet corn batter and fried up until it’s crispy and golden brown.

The special pricing deal was available at SONIC several times year: on May 4, on April 19, on March 17, and February 8, customers at participating locations had the chance to buy them with no limit on the number of Corn Dogs they could get for 50 cents each.