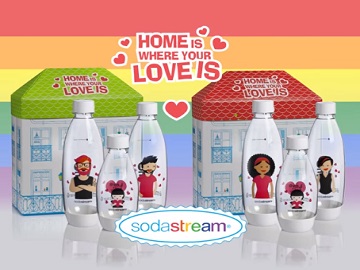 The launch is marked by an animated spot dubbed “Home is where your love is”, which features two little girls on a play date, each accompanied by one of their parents, namely dad and mom. The heartwarming film, aimed at illustrating a parent’s love for their kids through a series of mishaps the little ones have, ends with them returning home. At the front door, the other parent awaits them and it turns out it’s quite the opposite as the viewers might think of initially.

Earlier this year, in May, the brand celebrated the Royal Wedding of Prince Harry and Meghan Markle with a limited-edition Royal Wedding bottle “hats”.

SodaStream has enlisted several celebrities to endorse its products, over the years. Among them are the LA-based personal trainer, businesswoman, author and television personality Jillian Michaels, Big Bang Theory star Mayim Bialik, and Scarlet Johansson, who faced a harsh backlash and became the center of a globe-spanning debate about Israeli-Palestinian relations after her Super Bowl ad for the brand hit the internet.