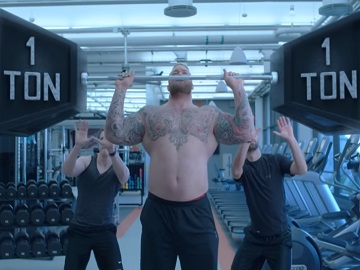 The spot features the Icelandic professional strongman and actor Hafthor “The Mountain” Bjornsson (who played Ser Gregor “The Mountain” Clegane for the HBO series Game of Thrones) in a gym in Iceland, calling SodaStream’s CEO and telling him he has a fantastic idea. Unluckily for him, the latter tries to dismiss him as fast as possible and does that using a SodaStream machine. After saying that it’s time to sparkle, he takes a flight to PepsiCo’s headquarters, in New York, to share his idea with “the new guy,” referring to PepsiCo’s CEO, Ramon Laguarta.
The next shot features Laguarta announcing, during a press conference, that the deal is closed and PepsiCO is acquiring SodaStream, while The Mountain, wearing an elegant suit this time, makes the heart shape with his hands and sends kisses into the air to Laguarta, who is captured, in several photos, visibly embarassed.
However, it turns out that, later on, Laguarta uses the same technique to get rid of The Mountain, when called by him: he pushes the button of a SodaStream sparkling water maker.

PepsiCo announced it will acquire SodaStream earlier this year, in August.

In a recent commercial, titled “Time For A Change,” SodaStream took a jab at Coca Cola’s iconic 1971 commercial “Hilltop” (which featured diverse youngsters from around the world singing “I’d like to buy the world a Coke” standing on a hilltop in Italy with Cokes in their hands) by showing a group of people standing on an iceberg-sized heap of discarded plastic bottles, each with a plastic bottle of water (of the “Liter” brand) in their hands, singing about saving the world, in a song called “It’s Time for a Change”. The carbonated water maker has enlisted actress and singer Sarah Catherine Hook and actor Hafthor “The Mountain” Bjornsson to co-star. Moreover, Sir Rod Stewart gave voice to a sea turtle that also sang, raising the question “How many bottles would it take before we face the cost?”.

The brand highlights that the reusable SodaStream bottle can save up to 2000 bottles a year and, on its quest to “help save the world from plastic bottles,” encourages people to sign its pledge to eliminate single-use plastic bottles, advises them to stop using plastic bags, straws, cups and bottles, and donate now, informing that SodaStream will match every donation to the Turtle Island Reservation Network. In addition, SodaStream also funds a sea turtle tattoo to help raise awareness for the fight against plastic.

The brand, which currently sells its flavoring products in plastic bottles, has also announced that it plans to transition them all to glass.