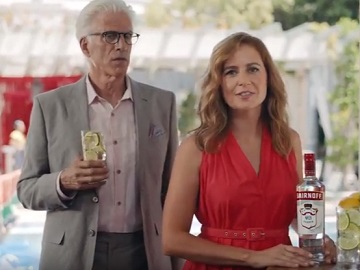 Smirnoff has released a commercial starring Jenna Fischer and Ted Danson to make a big announcement.

The 15-second spot opens with the 70-year-old actor, known for his role on the NBC sitcom Cheers, walking among the guests at a garden party and telling viewers that Smirnoff has some really big news and enlisted America’s greatest treasure to announce it. At this point, Jenna Fischer shows up and makes the announcement fast: “Hi, I’m Jenna Fischer. Smirnoff Vodka is now made with non-GMO grain.” Danson, left with nothing to say about the brand, adds “Well, I guess, two treasures is good”.

Danson and Fischer are not the only celebrities tapped by the vodka brand. LGBTQ television personality Jonathan Van Ness, LGBTQ advocate and actress Laverne Cox and comedian and actress Nicole Byer have been also enlisted to show that you don’t need a lot to have a good time in the new ” Welcome To The Fun%” campaign. Each TV spot, released with the tagline “Welcome to the Fun%,” depicts a different scenario in which Danson, who’s been a longtime SMIRNOFF partner, joins a fellow cast member to tout the brand’s award-winning credentials and “Made in America” heritage. People are encouraged to drink responsibly.