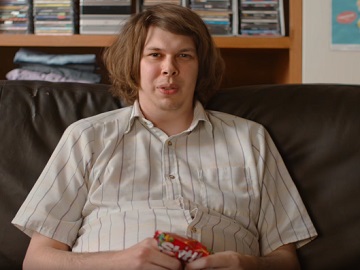 Skittles has released a hilarious new ad presenting “Super Important Super Bowl News”. The brand announces “most exclusive Super Bowl ad ever made”, to be shown to only one person, a teenager from Canoga Park, USA, named Marcos Menendez.

The spot announcing the Super Bowl commercial, created by DDB, features an anchorman giving the news and answering to a guy’s remarks, expressed as he hears them. “Why would you make an ad and show it to one single person?” – asks the young man, who’s sitting on the couch and eats Skittles.

“Because sometimes what you cannot see is more interesting than what you can see.” – comes the answer, which doesn’t seem to please the protagonist, who’s asking “According to whom?”. This last question annoys the newscaster, who explains that he doesn’t know and that he’s just reading the news given to him to read. “They’re probably not even making a real ad.” – the guy in front of the TV says. When he’s told he is wrong and that “it’s a real Super Bowl ad”, he argues that “it’s not technically a Super Bowl ad if it’s not on the Super Bowl”.

The news presenter “respectfully” asks the guy that he lets him do his job, but the guy still has something to say: “The CEO of Skittles definitely getting fired over this one”.

The 30-second spot, which also reveals that the teenager’s reaction to the brand’s Super Bowl commercial will be shown during the Super Bowl via a livestream on Skittles’ Facebook page, ends with the voiceover saying the tagline “Exclusive the rainbow, taste the rainbow”.

Skittles has also announced that its “ultra-exclusive” Super Bowl commercial, which will be teased in the upcoming weeks, leaving fans to “speculate and to be highly entertaining”, will star a celebrity whose identity will be soon revealed.

As of today, M&M’S is the only Mars Wrigley brand that will air a Super Bowl LII commercial.