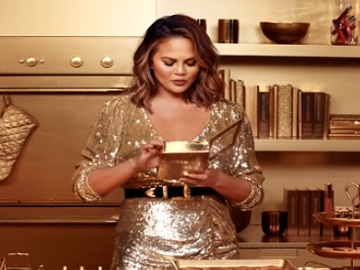 The 60-second spot opens Chrissy welcoming viewers to her Glow Kitchen and starting with the Becca Glow Soufflé, which is a two-in-one products, consisting of eyeshadow on top and a “cinnamon bun soufflé” (aka Face Highlighter) underneath, which has a “marshmallowy texture”. The next “ingredient” is a whipped liquid lip, called Lip Soufflé, which looks “like fabulous red velvet,” according to her, and “the grand finale” is the brand-new Glow powder, which is a loose powder highlighter that creates a glistening glow, and is scented like cinnamon sugar. “I think you’re gonna love this recipe,” the model says at the end of the commercial.

Sephora informs that BECCA is and will remain a cruelty-free company. They do not test their products on animals, and will continue to hold true to this principle.

The Glow Kitchen Kit – Becca x Chrissy Teigen is available for purchase for $44.00. Those who spend $50 on Sephora’s website get free shipping.