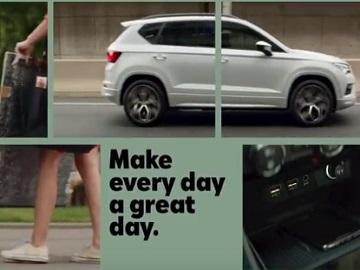 SEAT encourages people to “Make every day a great day” in its latest commercial for SEAT Ateca, which is aimed at illustrating how your SEAT Ateca is always there to help with its Virtual Pedal, Connectivity Box and Digital Cluster.

The 30-second ad, titled “Monday,” features a variety of persons on a Monday trying to make it a great day or at least the most out of it, with “half-asleep jokes, sidewalk daydreams, and coffee breaks filled with weekend stories”. The first day of the week is described by the voiceover as “the day you notice tiny details, when getting home feels like heaven”. The contrast between the wish of just wanting to survive a Monday and the wish of it to never end is also illustrated through a man at the office, waiting for his working hours to end, and a man spending time in bed with his loved one.

“Make every day a great day. SEAT Ateca”, the voiceover says at the end of the commercial.

Boasting a distinctive and dynamic style, the new SEAT Ateca features a state-of-the-art 4DRIVE, one of the most advanced all-wheel drive systems in the world, which will help you enjoy more power and traction. Its advanced technology features include Full Link Technology, which allows you to connect your smartphone and enjoy using all your mobile apps while on the road, fully digital cluster, wireless charger, Top View Camera and Park Assist, Virtual Pedal, a sensor underneath the rear of the vehicle, which allows you open the boot of the SEAT Ateca handsfree, the Kessy feature, which allows you to unlock the car just by approaching it, and others.