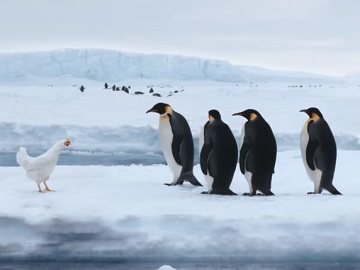 Sanderson Farms highlight, in a hilarious new ad, that their never freeze their chicken.

The 30-second spot features a white hen walking towards a group of four penguins, at the North Pole, talking to herself that her trip there was “a mistake.” Noticing that “it’s like really, really cold,” the spring chicken asks then the penguins if they are ok with how cold it is. Surprised to see they are just walking in it and even diving into the icy cold water, she starts worrying and aks if someone is going to check on the penguin that went underwater.

The commercial ends with the voiceover saying “Chicken aren’t meant to be this cold. That’s why at Sanderson Farms we never freeze our chicken” and with the brand’s tagline – “Good, honest chicken” – flashing across the screen.

This isn’t the first time the white hen stars in a Sanderson Farms commercial. In a previous one, aimed at highlighting that, at Sanderson Farms, you get fresh quality chicken for an honest price, she is seen receiving an expensive gift, that just leaves her speechless. Another ad, informing that, at Sanderson farms, chicken are fed a balanced protein rich diet, features the hen at a restaurant, causing trouble to a waiter who brings her a wrong meal.