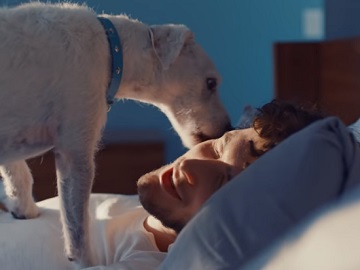 Samsung advertises the SmartThings app, which connects Samsung smart devices with each other so they can work together to make your home even smarter, in a series of new ads. One of them features a young man and his dog, Rocco, in a “battle of wills”.

The 30-second spot opens with the canine waiting near the guy’s bed with his leash in his mouth to be taken out for his morning walk. Seeing his human friend turning off the alarm and getting back to sleep, Rocco goes in the living room and turns on multiple smart devices with a single tap. The loud music makes the guy wake up again, but not for long – he grabs his smartphone and, using the Scene mode within the SmartThings app, he starts controlling those devices in one scene, so he turns them all off with a single tap, as well. The next thing Rocco does is to jump on the bed and turn on the TV, but also this time his owner finds a way to take things back as they were without getting out of the bed – he asks Bixby to turn the TV off. Eventually, Rocco decides to use another technique to make the guy stand up, a technique that doesn’t fail: licking his face. “All right, Rocco, you win,” the man tells him.

The commercial, which ends with the man and his dog getting out of the door for the morning walk, also informs that, with SmartThings, you can automatically turn off devices when you leave home and features the tagline “Your home and life in sync with SmartThings”.

SmartThings works with a growing number of devices, including TV, AV, Air Conditioner, robot vacuum, refrigerator, camera, doorbells, locks, outlets, motion sensors, and more, and allows users to perform a variety of actions, such as switching from TV to phone and from phone to TV, seeing the inside of their Samsung fridge on their Samsung TV or on their smartphone, connecting multiple Samsung speakers and listen to their favorite music/podcasts even when they move from room to room, setting the sprinkler to come on at sunrise, or the lights at sunset, and many more.