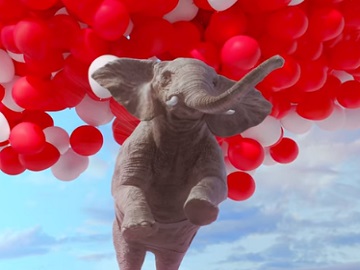 Samsung has released the retail demo to show the superior picture of its intelligent 2018 QLED TV lineup.

The Korean electronics giant takes viewers to a never-seen-before place called “Quantum World”, where stunning colors open up a fantasy that includes an elephant up in the sky held by thousands of red and white balloons, huge cakes with red topping and strawberries, red roses blooming, a broccoli plantation on the back of a huge turtle flying up in the sky, above cities, alongside fellow turtles, planes made of blue paper up in the air, “chased” by a little girl, eager to see them closer, and finally lots of colorful balls climbing up to the sky and exploding with dozens of colors spreading all around.

Unveiled on March 7th, at a global launch event held at the American Stock Exchange in New York City, Samsung’s QLED 2018 line-up includes the Q9F, Q8F, Q7F, Q7C (a curved variant) and the Q6F. The first two offer full-array local dimming, while the balance of the QLED lineup use edge-lighting technology and are therefore slightly slimmer in form. The entire QLED TV range features anti-reflective technology which increases off-angle picture performance and black level performance, and Ambient Mode, the chameleon-like feature which allows the TV to mimic its surroundings on-screen. The TV can also overlay weather information, news, or photos looking like real photo prints.

In a recent commercial, aimed at encouraging people to “spend more time watching and less time searching”, Samsung highlighted a series of key features of its newest QLED TVs, listing the “seamless and effortless experience even from the set-up”, a remote control that automatically detect and identify your devices as you connect and consolidate all your remotes into one remote control, the voice-command and more.

Previous: GoCompare TV Advert – Eat Out More. Fork Out Less
Next: Burger King Spicy Chicken Nuggets Are Back Commercial – 10 for $1.69