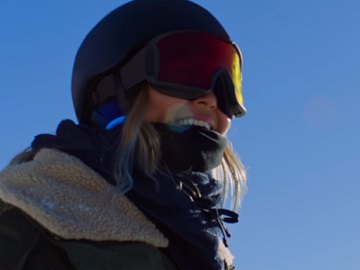 Samsung continues its #DoWhatYouCant campaign with a series of new ads called “Road to PyeongChang”, telling the stories of several Olympic athletes who are going to represent the United States at the 2018 Olympic Winter Games, in PyeongChang, South Korea.

One of them follows the 17-year-old American snowboarding phenom Chloe Kim and her father, Jong Kim, who left South Korea when he was young and immigrated to America, which he heard it was “the land of opportunity”, for a better future, talking about their journey. The 2-minute film opens with a video filmed by Chloe’s father when she was competing in a snowboarding event at a very young age and continues with the father-daughter duo leaving their house and going in the mountains for her to train. In the meantime, Kim’s voice is heard talking about the dream he has when arriving in the US and how he realized his daughter had the potential to be an Olympian.

“Chloe started snowboarding when she was four. So when she was eight I found she had potential to be an Olympian.”, he says, while Chloe reveals that her father was her coach for a really long time and taught her “almost everything”. She also says he gave up his job in order to be able to support her through her journey and that she “definitely wouldn’t be as successful” without that.

Chloe says her Olympic journey was a group effort, “so hopefully everyone is really proud of each other”, and reveals she feels like she’s representing both South Korea and the US at this year’s Olympic Winter Games. About her participation at the highly-anticipated event, her father believes she will get a good result and admits he gets nervous.