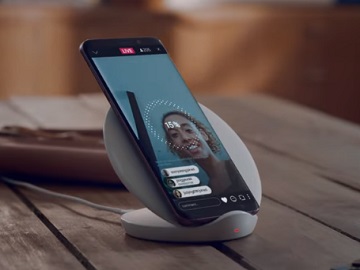 Samsung promotes, in a new commercial, the Wireless Charger Stand, available for the Samsung Galaxy S9.

The 30-second spot, aimed at highlighting that the Wireless Charger Stand & Convertible helps you stay powered up all day long, features several persons who use it when they run out of battery during important activities they carry out. A woman who’s watching a cooking video and follows the exact instructions, a craftswoman who’s holding a sort of training through a video call or filming a tutorial on how to make a bracelet, and an architect who’s having a video conference are the protagonists of the ad, proving that this wireless charger helps you avoid fumbling for the charging cable and all kind of unpleasant situations.

Described as “As beautiful as it is functional,” the Wireless Charger Convertible can be used as a pad to set your phone down, or lifted to keep your phone at an optimal viewing angle. The Wireless charger, power cord, and adapter are sold separately.

Other accessories for Samsung’s flagship smartphone are a variety of covers including the S-View Flip Cover, the LED Wallet Cover, the Alcantara Cover, the Rugged Protective Cover, the DeX Pad, the Portable Battery Pack, earphones tuned by AKG.