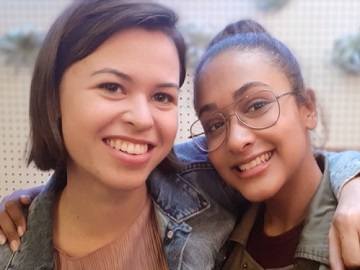 Samsung has released a new ad aimed at highlighting that you can capture the real you with the Live Focus feature on the Galaxy A8 and A8+.

The spot shows a young woman who took photos of strangers she found beautiful with her Galaxy A8 talking about her social experiment and the Live Focus feature. “I’ve been taking photos of things I find beautiful with my Galaxy A8. The Live Focus feature really helped me focus on everyone’s personality.”, the woman says, explaining then how it works. “All you have to do is open up your front-facing camera and hit “Live Focus”. You can blur out the background in real time so your selfie bring out who you really are. It’s super simple and makes things look really as they are. And if strangers sneak into your pic, you can easily blur them out and rescue your selfie.” she says, adding that “You can pretty much do it to any photo as long as it’s taken in Live Focus”. “With Live Focus, it lets you capture your true self.” the young woman also says, putting her phone down and starting to talk to her girl friend at the table, who’s planning for them to go to salsa dancing.

Available in Black, Orchid Gray, Gold and Blue, the Samsung Galaxy A8 and A8+ feature the biggest Infinity Display for Galaxy A phones to date (8.5:9 ratio), which provides a stunning cinematic experience. The smartphones’ rear camera also has improved low-light capability, which helps capture the scene clearly, regardless of the moment of the day. Water and dust resistance, Bixby, the virtual assistant that works via text and touch and learns your habits, as well as Samsung Pay, which enables users to check out virtually anywhere they would use their credit card in a simple and secure way, Dual Messenger, and Secure Folder are among other key features of the Galaxy A8 and A8+.

Launched in select markets around the world in January 2018, the two smartphones of the South Korean company can be purchased in the US via third-party sellers on Amazon or eBay or from retailer B&H Photo Video, that is now selling both with 1-year US warranty. B&H is selling the Samsung Galaxy A8 (2018) for $479.99, while asking $529.99 for the Galaxy A8+ (2018).