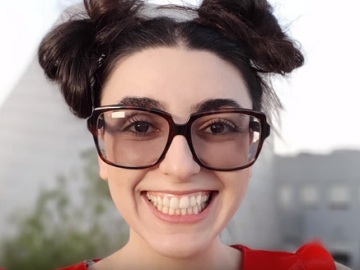 Samsung showcases its new Galaxy A8 and A8+ smartphones in a digital film aiming to highlight that Galaxy A8 features a camera that “captures the true personality and beauty in you, others and the world around you, in any condition”, and “lets you be you”.

The 1-minute and a half film is the result of a social experiment conducted by a young woman who asked strangers to let her take their picture. As she recorded those persons, women and men alike, she told them the purpose of her project, namely taking pictures of things she finds beautiful.

Their reactions are captured by the Galaxy A8 reat 16MP camera, which boasts improved low-light capability, bright F1.7 lens, larger 1.12 pixels, and bigger 1/2.8” sensor, that bring in light from the environment and make photos crisp and detailed.

“I think I’ve learned how to accept my quirks, I guess, because everyone’s different. And that’s what makes people beautiful, I think.” – a young woman participating at the social experiment says at the end of the film.
The Dual Front Camera innovates selfies and wefies thanks to the Live Focus mode, which blurs the background, adding bokeh so you and your friends stand out. Users will be able to customize their pictures with a variety of stickers using face-recognition technology or edit before they shoot with Food mode, Beauty effect, and filters. Among the S8’s other features are an 18:9 Super AMOLED Infinity Display, IP68 dust/water resistance, and Samsung Pay for NFC and MST payments.

Announced in late December 2017 and set to be officially launched on Friday, January 5, Samsung Galaxy A8 is now available for pre-order in South Korea. The official carrier for the A8 there is KT Corp and it’s selling the smartphone for 599.500 won (about $561 USD).