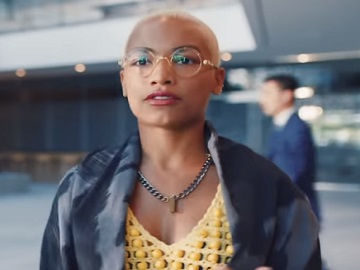 Samsung invites you to say Hi to the new Bixby, Samsung’s intelligent assistant, in a new commercial.

The 60-second spot highlights some of Bixby’s key features through different scenarios that show people asking the intelligent assistant to do certain things. Thus, after an onscreen line informing that Bixby understands natural language and that you should just talk like you would to a friend. A short-haired woman asks Bixby to tell her what is on her schedule in the afternoon and, reminded that she has a meeting with pattern maker from 1pm, she asks the intelligent assistant to change the event time to 2pm. A young Asian man asks Bixby to find Italian restaurants nearby and to get him a table for 3 at Luciano’s at 1pm. Another young man, who asks Bixby to get him an Uber to work, is informed on the cost of his ride and asked to confirm the ride, he confirms it, which enables Bixby to remember the kind of ride he prefers the next time he wants one. Finally, a woman leaving her office tells Bixby it’s run time, which leads to a series of actions by the assistant, such as turning on Bluetooth, starting a run in Samsung Health, and playing run playlist.

The ad also highlights that Bixby understand context, too, so it can follow a conversation. It works with apps you love, so you can do more, smarter. It learns what you like to be more helpful over time. It can simplify your routines too just by giving the command.

At the end of the ad, the tagline “Bixby. Say less, do more.” flashes across the screen.