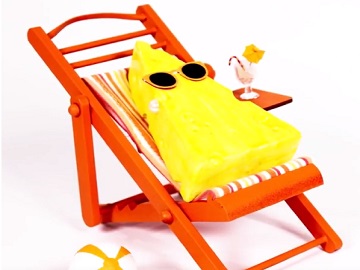 Sainsbury’s has launched a new ad campaign, aimed at informing/reminding people that food passed its best before date is still good to eat.

“Food past its best before date is still good to eat,” a first onscreen line reads at the beginning of the spot featuring “Big Cheese”, a piece of cheese brought to life, who says he used to be the best. “But times changed. My best before date arrived. So I took a much needed break to catch some rays,” Big Cheese reveals, as he is seen on screen leaving his desk job to catch some rays and become melted cheese on a slice of bread. “Hello new me”, he greets himself at the end of the spot, before someone grabs the toast.

The other spots introduce Rock and Bread Roll, who can still give a fresh performance when toasted, and Runner Bean, who proves he is still good to eat after its best before date, when steamed or boiled.