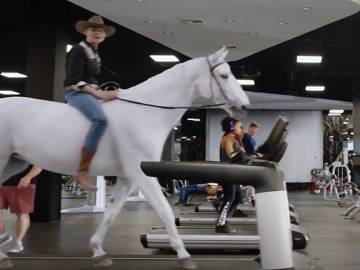 SafeAuto continues its “Terrible Quotes” campaign with a new spot, aimed at highlighting that SafeAuto will get you a great car insurance quote in just three minutes.

The 30-second spot opens with a bunch of people dancing on a beach while a monster gets out of the ocean, ready to attack them.

“Stars can’t shine without darkness and that’s depressing.”, a female voiceover is heard saying. The next scene features a woman saying, while looking into her smartphone, “I prefer everything in small doses”. The woman sitting in front of her, who seems a patient, completes the sentence with “except Carl”. Finally, a woman riding a horse that walks on a treadmill in a gym says “My body is a temple that just got a battleship tattoo”. “These are terrible quotes, but SafeAuto will get you a great car insurance quote in just three minutes and could save you 25%.”, the voiceover says at the end of the commercial. “Wow, that is a great quote.” – a woman on the beach answers over the phone.

Founded in Columbus, Ohio, in 1993, SafeAuto is property and casualty auto insurance carrier that provides state-minimum private-passenger auto insurance for drivers in the nonstandard insurance market in 17 states across the country, including Ohio, Texas, California, Kansas, Missouri, Illinois, and more.