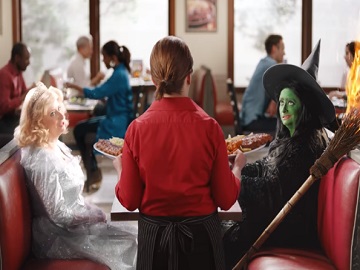 Ruby Tuesday promotes, in a new ad, its Summer Platters, which are “the perfect summer barbecue” for just $13.99 each.

The spot opens with a woman wearing a fairy costume in a Ruby Tuesday restaurant saying that Ruby Tuesday’s new Summer Platters are “just $13.99” and adding “Slow-cooked ribs and buttermilk chicken tenders in two flavors – Heat or Sweet.” At this point, the same woman, dressed as a waitress, brings two Summer Platters, asking “who gets the Heat and who gets the Sweet”. It turns out at the table sits a third version of the same woman, dressed as a witch, who asks the waitress to “take a wild guess.” “She’s such a b…ch!” the fairy says. However, when it comes to deal with the bill, they both vanish into thin air and this happens “every single time”, judging by the waitress’ reaction.

The Summer Platters menu, available for a limited-time at participating locations, includes the Nashville Heat Platter, which features ribs and double-dipped buttermilk crispy chicken tenders sauced up with a cayenne pepper and smoked paprika spice blend along with lemon pepper coleslaw, dipping sauce, sliced pickles and a side of fries, and the Sweet Tea Glazed Platter, which features double-dipped buttermilk crispy chicken tenders and slow-cooked ribs sauced up in a tea, honey and mild spice blend, along with tangy coleslaw, dipping sauce and a side of fries.