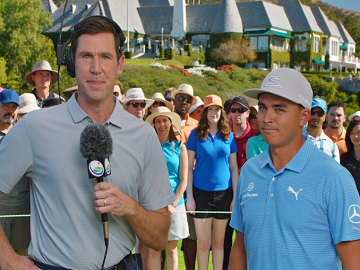 The 30-second spot, titled “Simple Moments”, opens with a reporter reporting live with Rickie Fowler, who explains in simple words what he had managed to do a few moments earlier on the field. “Simple as always. I wish you were my mortgage guy,” the reporter tells him, continuing to reveal some of the words “the mortgage guy” uses, making thus the mortgage process difficult to understand. The reporter ends up by taking his frustrations out on Fowler with a question directed to “the mortgage guy”, whose name it turns out is Rick. “And what does PMI even mean, Rick?” he asks, shouting, before handing back to the studio.

“That got weird,” Fowler tells the reporter once the live feed is over. The latter, who admits that “it really did”, is then advised by Fowler to try Rocket Mortgage.

“Golf is complex, but understanding your mortgage is simple. Get approved in within eight minutes with Rocket Mortgage,” the voiceover says at the end of the spot, adding the tagline “America’s largest mortgage lender”.