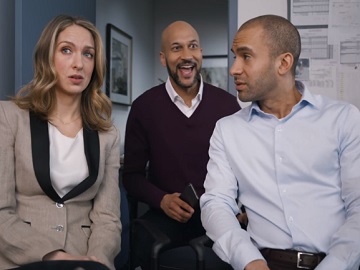 The 30-second spot features the actor/comedian showing up in a couple’s living room and translates for the young woman the messages conveyed by her date, who’s switching to a sports channel to watch curling. “Oh, your date is making you watch curling. My man is literally cheering for people cleaning,” Key tells the woman, while the guy is seen cheering.

The next shot features a couple being informed by a bank officer that they can get a mortgage that avoids PMI, but there’s no way to avoid AMI, which makes them confused since they don’t understand a thing. At this point, Key intervenes, telling them that Rocket Mortage by Quicken Loans will help.

“Rocket Mortgage by Quicken Loans makes the complex simple. Understand the details and get approved in as few as eight minutes,” the voiceover says at the end of the commercial, which also highlights that Quicken Loans is “America’s largest mortgage lender”.

Keegan-Michael Key teamed up with the mortgage lending company earlier this year to star in its Super Bowl LII ad, which also featured a cameo appearance by Big Sean.