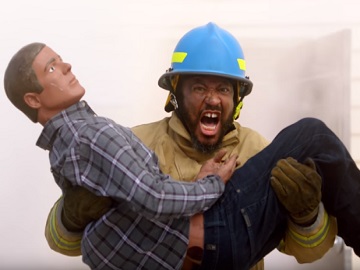 Quicken Loans promotes its Rocket Mortgage in a new commercial, featuring Teddy, a man who has confidence when it comes to handling the BBQ pits or volunteering at the firehouse, but not so much when it comes to mortgages.

The 30-second spot features Teddy, described by the voiceover as a “pit master”, doing a barbecue and saving a dummy from a fire, as part of his training at the firehouse, where he is a volunteer. The voiceover also says that Teddy is less confident about mortgages and adds that, luckily, there is Rocket Mortgage by Quicken Loans. He then lists some of the reasons why this app is good, such as simplicity, that allows Teddy to understand the details, and the possibility to get approved in as few as eight minutes.

The commercial ends with the voiceover saying the company’s tagline, “Apply Simply, Understand Fully”, while Teddy and his friends are seen rushing from a barbecue when a dalmatian comes to “inform” them about a fire.