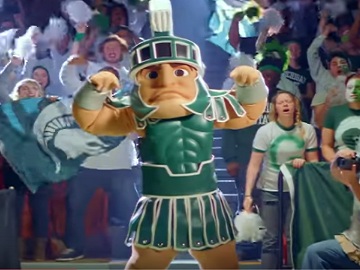 Mortgage lending company Quicken Loans continues its ad campaign promoting the Rocket Mortgage app with a new spot, featuring ten of the most popular college mascots all under one roof.

“College mascots… When it comes to owning the courts and pumping up fans, nobody does it better. But when it comes to mortgages, though, less confident. Fortunately, there’s Rocket Mortgage by Quicken Loans. It’s simple so they can understand the details and get approved in as few as eight minutes.” – the voiceover says in the 30-second spot, which features the mascots of ten basketball teams, including the NC State Wolfpack (nickname of the athletic teams representing North Carolina State University), Truman the Tiger (the official mascot of the athletic teams of the University of Missouri Tigers), Will D. Cat (the mascot of the athletic teams of Villanova University, The Villanova Wildcats), Sparty (the mascot of the Michigan State Spartans), and more.

“Apply simply, understand fully.” – the voiceover also says at the end of the spot, adding that Quicken Loans is a proud supporter of College Athletics.

Rocket Mortgage by QuickenLoans, ranked “highest in customer satisfaction in the U.S.” for eight consecutive years by J.D. Power, helps users get an intelligent, customizable mortgage solution based on today’s rates, with the possibility to get an approval to buy a home or refinance their mortgage in minutes.

Previous: E*TRADE You Like @Just_Marea Commercial
Next: McDonald’s $1 $2 $3 Dollar Menu My Office Is Full of Kleptos Meal Commercial