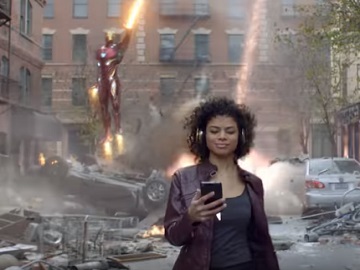 Quicken Loans highlights, in its latest commercial, that the mortgage process doesn’t have to be a battle and invites people to catch their favorite confident heroes like Doctor Strange and Iron Man in Marvel Studios’ Avengers: Infinity War in theaters April 27.

The 30-second spot, part of a fully integrated campaign, features a young woman walking through the city streets with her headphones on, looking at her phone, on the Rocket Mortgage app, while around her Iron Man and Dr. Strange are using their superpowers to help her arrive safely at her new home. “Rocket Mortgage by Quicken Loans makes the complex simple, giving you superhero levels of confidence,” the voiceover says, adding “Understand the details and get approved in as few as eight minutes, so nothing stands in your way”.

The commercial, soundtracked by The Isley Brothers’ 1969 funk single “It’s Your Thing”, ends with the company’s tagline, “America’s largest mortgage lender.” Onscreen lines also inform that the statement according to which you can get approved in as few as eight minutes is based on a sample of Rocket Mortgage clients who met qualifying approval criteria and specific loan requirements available at the time of application.

Set two years after the Avengers were torn apart during the events of Captain America: Civil War, the film follows the Avengers as they join forces with the Guardians of the Galaxy to stop Thanos from collecting the all-powerful Infinity Stones and destroying half the universe.

Avengers: Infinity War was promoted during the Super Bowl LII, on February 4, 2018, through a new teaser launched by Disney, and also by GEICO, in one of its latest commercials, released earlier this week, which features the Gecko talking to Avengers action figures in his office.