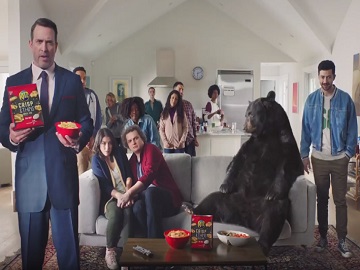 RITZ Crackers encourage people to lighten up their gameday with RITZ Crisp & Thins in a new commercial, themed around mascots and featuring a live mascot.

“Mascots really lighten up games at the stadium. So this guy brought one to lighten up this watch party,” the RITZ spokesman says holding a bag of RITZ Crisp & Thins and a plate with chips in his hands, while next to him a bunch of people are seen watching a game on TV being joined by a grizzly bear whose roar obviously terrifies them. The spokesman then suggests to stick with a “tasty oven-baked chip”, which is tasted by a young woman.