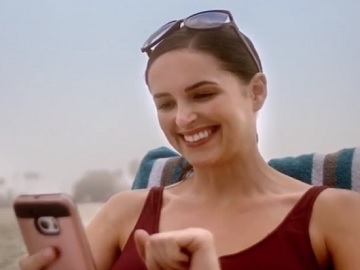 RetailMeNot highlights, in its latest commercial, that “money is hiding everywhere with the RetailMeNot App”.

The 30-second spot opens with a man using a metal detector on a beach in its quest to find money and other precious metal items. When a specific sound leads him to believe that he just has found something, it turns out it was a false alarm, the “treasure” discovered being only a fish skeleton.

“Money’s hiding everywhere. But just not here. When you shop with RetailMeNot, it’s easy to find money everywhere,” the voiceover says, while on screen a woman is shown on the same beach, not far from the treasure hunter, using the RetailMeNot App to get coupons for what she wants to purchase. The voiceover then mentions that, on RetailMeNot, you can get “coupons, deals, and even cash back on everything you need,” adding, eventually, “It’s kind of a big deal”.

In another recent ad, the multinational company headquartered in Austin, which maintains a collection of coupon web sites and helps people save on retail, travel, food, groceries, prescriptions with coupons, promo codes, sales, cash back offers, and gift card deals for thousands of stores and brands, promoted its browser extension, RetailMeNot Genie, which quickly finds and applies the best promo codes, helping customers get the biggest savings at their favorite stores. Among the stores supported by Genie are JCPenney, Champs Sports, Sears, Target, American Eagle, Forever 21, Vitacost, Amazon.com, and more.