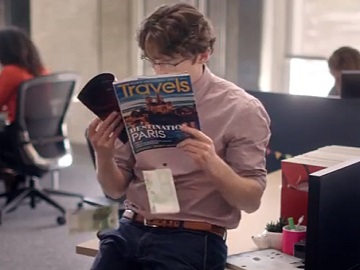 American multinational company RetailMeNot, that maintains a collection of coupon web sites and connects consumers with retailers, restaurants and brands, both online and in-store, highlights – in its latest commercial – that “Saving on Everything Really Adds Up”.

“When you shop with RetailMeNot, you find money everywhere,” the voiceover says at the beginning of the 15-second spot, which features a young man finding money in a travel magazine, a couple finding money inside the napkins at the restaurant, a woman finding money in a pillbox, and a man booking a flight from Chicago to Paris for a chance to save up to $650. “And when you save on everything, it really adds up. It’s kind of a big deal,” the voiceover also says, adding the company’s tagline, “Yours For The Saving”.

In other commercials, RetailMeNot has promoted its mobile app, which enables users to find deals from thousands of retailers and food offers from thousands of nationwide and local restaurants, the possibility for the website’s users to claim up to $30 in one click, and more.