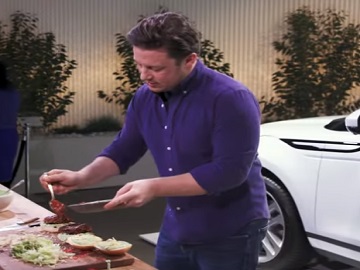 Land Rover has released a new commercial, featuring Jamie Oliver as he goes on a culinary journey in the new Range Rover Evoque and taking an adventurous shortcut on his way to creating London’s best veggie burger.

“Today is a big day. I’ve got an event on. I’ve gotta cook for a bunch of people, so I’ve got to do a load of shopping,” the celebrity chef says as he drives the new Range Rover Evoque around the city, to purchase the necessary ingredients. In the spare time he has, he puts the SUV to the test – a test that implied driving through water, on guide rails, and more, and finally he makes it to the event just in time to get cooking.

Jamie Oliver is then seen at the launch event of the new Range Rover Evoque, suggesting he has for participants one of the very best veggie burgers, “full of color, full of life,” which will be fancied by everyone, whether they eat meat or not.

This epic Veggie Burger was inspired, according to Jamie, by an Onion Bhaji and the flavours of Brick Lane. The full video is available on his YouTube channel.