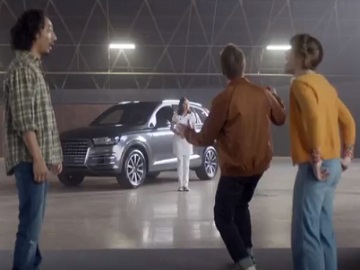 Progressive takes a jab at companies that use “real people, not actors” in their commercials by using “Real actors. Not people” in one of its latest commercials.

The 30-second ad, titled “Real Actors”, opens with the company’s spokesman Jamie (played by Jim Cashman) telling a man and a woman that they are in a small room. Immediately after ending the sentence, he sees one of the walls disappearing and Flo (played by Stephanie Courtney) standing near a car, in a much bigger room. “How many of you use car insurance?” Flo asks them. Seeing three hands raised, she then asks “What if I showed you this?”, pointing towards a laptop placed in the middle of a room even bigger. Flo then informs the two “real actors” that Progressive compares rates to help consumers get the price and coverage that are right for them. At this point, Jamie shouts excited “That’s amazing!”, adding that the only thing that could make that better would be his mother being there. When an old lady portraying his mom shows up out of nowhere, he screams with bewilderment, hugging one of her legs, since she is (still) up in the air.

Flo, played by actress Stephanie Courtney, debuted in 2008 through several TV ads and appeared in more than 100 commercials for the insurance company. Her Australian counterpart, named Kitty, is played by Australian actress Holly Austin. Jamie, played by actor and writer Jim Cashman (who had parts on The Boss, Saturday Night Live, and Benched 2014), started appearing in Progressive ads, alongside Flo, in 2017. He also stars as lead in many spots.

In one of them, dubbed “Jamie’s Twin”, he even had a doppelganger, played by British actor Jack Turner.

Launched in 2009, the Name Your Price tool, which helps drivers customize their car insurance by coverage and price, has been often promoted by the insurance company in advertising campaigns ever since. Specialists, however, warned against using price as the deciding factor when shopping for coverage.