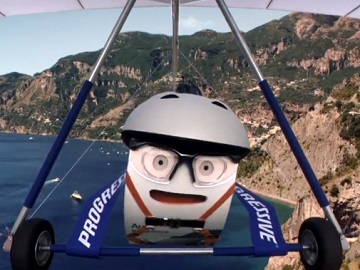 During the Super Bowl LII, viewers had the chance to see also the Progressive Box. The insurance company runned a commercial dubbed “My Year of Me”, that featured its longtime-mascot voiced by Chris Parnell recalling memories from his year-long trip.

“If you told me a year ago where I’d be right now, I would have said you were crazy, but so began the year of me. I discovered the true meaning of paperless discounts and the indescribable rush of saving drivers an average of $620.” – The Box is heard saying while on screen he is seen on a beach from Hawaii having fun with locals at a night party on the beach, paragliding above the ocean, sailing in heavy weather, and riding a vespa in the narrow streets of an Italian town. The Box continues his story about his journey by telling he fell in love three times: once with a woman, once with a country, and finally with himself. As the spot ends, it turns out the Box was sharing all these things with a customs agent, who doesn’t seem very impressed and asks him if he has anything to declare or not. “Isn’t that what I’m doing?”, the Box asks in response to the man’s question.