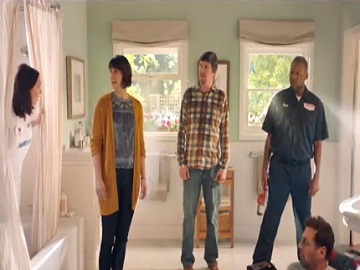 Progressive has just released a hilarious new commercial to promote its wide range of coverage policies.

Titled “Experts”, the 30-second spot features a married couple in their bathroom, looking at the new sink the husband has installed. His wife says it looks great, but the next second water begins to flow through the drainage pipe, so a plumber shows up to fix the problem, but manages, instead, to cause more damage.

“Sometimes, you need an expert. And sometimes, those experts need experts.” – the voiceover says, while on screen another expert is seen coming to the respective couple to repair the damages caused by the plumber. “Sometimes, the expert the expert needed needs insurance expertise.” – the voiceover adds. At this point, Flo shows up from behind the shower curtain and informs everyone that “it’s all good”. Apparently, Steve, the plumber, is covered for general liability and Paul, the worker who came the second and hurt his back by falling to the floor, has his back covered literally with Workers’ comp (Workers’ compensation insurance). “Wow, it’s like a party in here!” – Flo says, asking then where the orders are. When a delivery lady parks outside the house, just near the window, smashing the window and causing damage to the walls, and serving her with some tartlets, Flo reminds everyone that Progressive covers commercial vehicles, too.

Employers can a get a workers’ compensation insurance quote with the Progressive Advantage Business Program and protect their business from medical costs and a portion of lost wages for an employee who becomes injured or ill on the job.