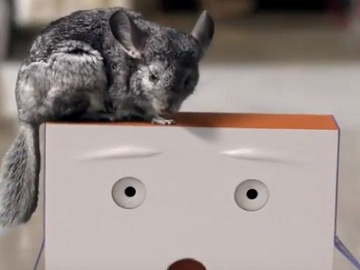 “What’s up, world! It’s the Box, with 30% savings for Safe Drivers. Coming at you with my brand new vlog.” – The Box says at the beginning of the 30-second spot. The animated character (voiced by Chris Parnell) starts then to show his fans what he does throughout the day, inviting them to check back for follow-up videos. He shows viewers his fridge, saying he’s “just making some ice” and urging them to check back for that follow-up vid, introduces his “cashew guy, Bruno” as cashew maestro, goes live at a fountain, and asks his fans for opinions whether he should buy chinchilla or not, and more. In the meantime, he also brags about saving people $620 for switching.

The vlog ends with a chinchilla update: the Box got that chinchilla after all and introduces him to the public as “Rocco”.

Progressive’s talking and winking box was first introduced in 2012 and has since appeared in numerous commercials. The message he delivers is that the average driver who switches to Progressive saves $620. Among the Progressive’s ways to save are bundling auto & property, Snapshot: BIG discounts for good drivers, which is a program that personalizes your rate based on your actual driving, so “the safer you drive, the more you can save”, and Name Your Price, a tool that shows you a range of coverages in your budget.