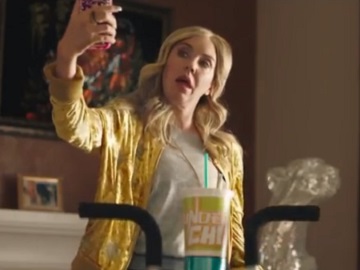 Progressive introduces, in its latest commercial, Janice, a woman who bought a house, but is not interested at all to get a coverage policy for it.

The 30-second spot, titled “Janice Bought a House”, opens with Flo knocking on Janice’s front door and telling her she found out from “mom” about hew new house. Without saying a word, Janice leads the way and hops on her stationary bike, but not for a spinning class: she starts, instead, to take selfie. When Flo tries to talk to her about the possibility to use Progressive’s Home Code Explorer feature, now that she has a house, Janice asks her to keep quiet because she’s blasting her quads, when she’s actually scrolling through her news feed on social media. Flo insists to get her attention, but showing her the feature on her laptop and explaining that “you just answer some simple questions online and you get coverage options to choose from,” but Janice keeps finding all kind of excuses to not look. “I’m in a meeting,” “You’re ruining my workout,” “Cycling is my passion,” she says, while still browsing through her phone.

The ad, which directs viewers to the company’s website, providing at the same time also a phone number, also informs that prices vary based on how you buy. It is also specified that home and renters insurance are not available in all states and are provided and serviced by affiliated and third-party insurers.

One of the largest providers of car insurance in the United States and ranked “one of the best insurance companies”, Progressive also insures motorcycles, boats, RVs and commercial vehicles. Founded in 1937 and headquartered in Mayfield Village, Ohio, the has expanded internationally as well, offering car insurance in Australia.

Flo, played by actress Stephanie Courtney, debuted in 2008 through several TV ads and appeared in more than 100 commercials for the insurance company. Her Australian counterpart, named Kitty, is played by Australian actress Holly Austin.