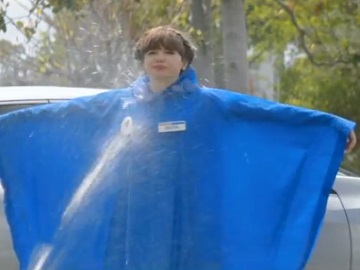 Progressive highlights, in a new ad, that when you bundle home and auto, you get round-the-clock protection.

The 30-second spot features Jamie and several colleagues getting out of a Progressive microbus in a suburban neighborhood, where they all head in different directions to protect against various risks, as the swing shift ended and their watch is about to start. One of them, set to keep an eye on a branch, is advised by the co-worker ready to leave to not make it windy, Jamie is informed about when the firepit he’s going to take care of was last used, with the suggestion to stay close, another one has already begun to protect a car against the water from the sprinkler. Finally, viewers are given a glimpse into a conversation between Jamie and Allan, another Progressive representative, who says it would be “Protected by Allan & Jamie”. Unluckily for him, Flo shows up right then and reveals she’s not happy at all to hear that. Fearful, Jamie, who agreed with Allan, shoots across the yard he was standing in, without looking back, but only encouraging his mate to follow him.

“When you bundle home and auto, you get more than just savings. You get round-the-clock protection,” the voiceover says at the end of the commercial.

Known for The Boss (2016), Saturday Night Live (1975) and Benched (2014), actor Jim Cashman started appearing in Progressive ads as Jamie in 2017, alongside Flo (actress Stephanie Courtney), who’s been a company’s spokeswoman since 2008. In one of the spots, dubbed “Jamie’s Twin”, he even had a doppelganger, played by British actor Jack Turner.

Founded in 1937 and headquartered in Mayfield Village, Ohio, the has expanded internationally as well, offering car insurance in Australia.