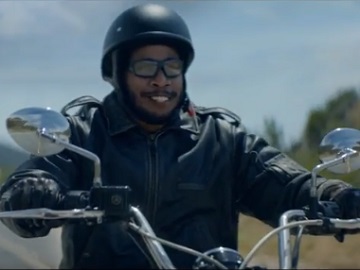 Progressive continues to advertise its policies, highlighting that basic policies start at $75 a year, in a new commercial that carries the tagline “A bad day on the road still beats a good one off it”.

The 30-second ad, titled “Overpass”, features two motorcyclists under an overpass, during a storm. While one of them awaits in silence for the rain to pass and be able to hit the road again, the other keeps making all kinds of things, some of them quite annoying for his fellow, such as asking him to check out the way he walks on a parapet, making a phone call to a beauty salloon, willing to know if they do laser hair removal for men, doing some sort of yoga, but not without prompting his travel companion to notice that his hips are on the ground, miming roars when accelerating the engine, and more.

When he feels he lost his patience and things couldn’t get worse, the other motorcyclist, who witnessed the first one do “his thing”, notices that rain stopped and immediately sets off again on his journey. As he speeds down the road, in a totally new mood, he asks his fellow to tell him more about that laser procedure.

“A bad day on the road still beats a good one off it,” the voiceover says at the end of the commercial, while an onscreen line informs that basic policies start at $75 a year.

This is the second instalment in this series marketing the motorcycle insurance. The first spot, dubbed “Avian Adventure” and set to the rhythms of “It’s Such a Good Night (From “Breaking Bad”) by Heisenberg & The Albuquerque Kingpins, follows a motorcyclist on the road as he literally faces some birds one that lands right into his face and sticks its claws into his mouth and an ostrich that seems to be willing to have a frontal collision.

One of the largest providers of car insurance in the United States and ranked “one of the best insurance companies”, Progressive also insures boats and RVs, besides commercial vehicles and motorcycles. Founded in 1937 and headquartered in Mayfield Village, Ohio, the has expanded internationally as well, offering car insurance in Australia.