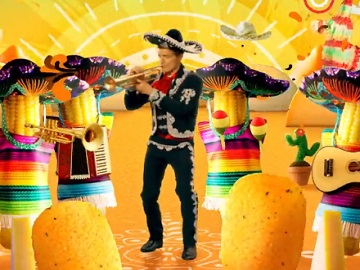 The 20-second spot opens with a guy in the company of his friends in a living room, opening a pack of Pringles Tortillas Nacho Cheese and turning into a Mexican who plays the trumpet alongside four corns donning Mexican outfits. “Oh, corny! Cheese.”, the voiceover says, while on screen the guy is seen acting like a Mexican near the corns and, back in the living, using the Pringles pack as a trumpet. “Pringles Nacho Cheese. Discover a world of flavour!”, the voiceover adds at the end of the spot, which sees the guy’s friends joining him.

While retaining the iconic Pringles shape, Pringles Tortillas are thicker chips because they’re made of corn, not potatoes. They can be dipped, but they are “delicious on their own”, according to Raj Joshi, vice president of Savory Snacks at Kellogg, who also said in a press release in 2014, when Pringles Tortillas were introduced, that “Pringles Tortillas are the brand’s first new product since Kellogg Company acquired it in 2012”. The product launch was accompanied by “You Don’t Just Eat ‘Em” marketing campaign, which included print and TV advertisements, complemented by PR and digital executions. The brand also teamed up with basketball legend Earvin “Magic” Johnson to help introduce its first-ever tortilla chip.

Previous: Credit Karma Off the Grid Guy in the Woods Commercial – Feat. J.D. Witherspoon
Next: Progressive Get That House The Box Commercial