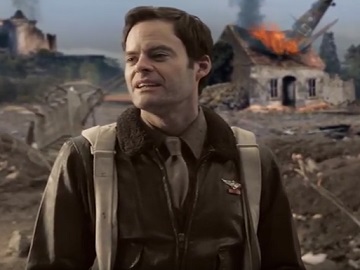 Pringles has released a teaser for its first Super Bowl ad ever, starring Bill Hader.

Titled “Terry the Pilot”, the 15-second teaser features the actor shooting a series of scenes as a pilot. “And that’s why they call me Terry the Pilot.” – Hader says, while in the background a building in flames is seen. “That’s how we do it on the farm.”, “I don’t need wings to fly.”, and “I miss you, Mandy.” – are other lines that he says before the onscreen line “Be wowed on Game Day” appears.

Pringles’ Super Bowl commercial, created by Grey NY, the brand’s ad agency of record, and directed by Documentary Now! Director Rhys Thomas, is set to air during the second quarter of the Big Game.