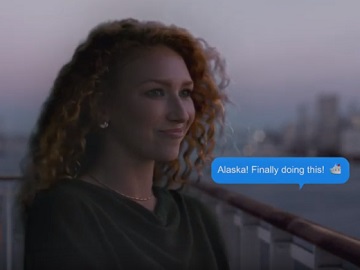 Princess Cruises has released a series of new commercials, showcasing the variety of things you can enjoy on a Princess Cruise and celebrating its status as #1 cruise line in Alaska.

One of the spots, titled “Doing This,” opens with a grandmother telling her grandson “We’re really doing this” while enjoying the sunset view from a Princess Cruise ship. As she says that, a whale jumps out of the water, leaving the kid speechless. Next, a young woman on the same ship, who’s in a jacuzzi with her partner, tells him “We’re finally doing this” as they watch the stunning landscape they leave behind. Finally, the grandmother shown at the beginning of the ad is seen dressed in a white outfit, whispering to her husband “I can’t believe we’re doing this”. The latter says, in response, “I can’t believe it’s been 40 years,” and, at this point, their family is shown as witnesses on the boat, celebrating with them their marriage anniversary.

“You can be doing this and more when you sail with the #1 cruise line in Alaska,” the voiceover says at the end of the commercial, adding the brand’s name and the tagline #comebacknew.