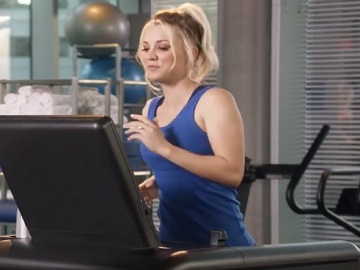 Kaley Cuoco wonders if she could save money by bundling her personal trainer and pet sitter in a new commercial for Priceline.com, the website that helps users find discount rates for travel-related purchases such as airline tickets and hotel stays.

“For the best deals on travel, just go to Priceline,” The Big Bang Theory actress says at the beginning of the 30-second spot, titled “Treadmill”. She then highlights that “now, you can save even more when you bundle your flight and hotel together, up to $625 off your trip” and wonders if she could also save money by bundling her personal trainer and pet sitter. At this point, viewers get to see Kaley running on a treadmill and being praised by her personal trainer, who says “Nice, Kaley, five more minutes!” He then goes on to encourage Trixie, a Golden Retriever who’s on a treadmill, as well, to “burn off those treats”, and the bulldog Frank to keep walking.

Finally, he approaches fish Goldie, who’s in a fish bowl, obviously, and, noticing the treadmill is not on, he turns it on.

“Bundling doesn’t work everywhere, but it does on Priceline,” Kaley says at the end of the commercial.