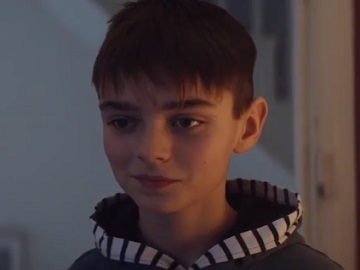 The spot, dubbed “Little Thief”, features a boy who’s trying to steal a Mr Kipling Angel Slice at a birthday party. Always surrounded by adults in the room, the event being a sort of family reunion, the “little thief” fails several times before finally getting his hand on a cake. When he arrives home, he rushes upstairs, but not in his room. Soon, it turns out the cake was for his teenage sister, who asks him to get out of her room. The kid puts the cake on top of her bureau, ready to leave, and, seeing her reaction, shows a hint of a smile.

The advert ends with the voiceover saying the brand tagline, “Exceedingly Good Cakes”.

Mr Kipling Angels Slices are, according to the brand, “delectable layers of pink and yellow sponge with a heavenly vanilla filling topped with fondant icing.” Mr Kipling range also includes Cherry Bakewells, which are light pastry cases filled with a layer of fruity jam, moist frangipane sponge, soft icing and a hand placed cherry on top, Battenbergs and Mini Battenbergs (battenbergs are moist chequered sponges wrapped in a soft almond flavoured paste), Bremley Apple Pies, Country Slices, which are spiced golden slices, bursting with juicy sultanas & currants, sprinkled with sugar, Manor House, which is a moist chequered sponge wrapped in a soft almond flavoured paste, Viennese Whirls, which are light shortbread swirls filled with fruity raspberry jam and a smooth creme filling, and others. Mr Kipling cakes are extremely popular, 60% of UK households indulging in the tasty treats every year, according to Premier Foods.

In 2017, Premier Foods developed a new Mr Kipling range of “indulgent” luxury fruit tarts and a “Free From” range of Gluten free cakes in order to meet consumer trends, expand the relevance of the brand and gain incremental space in store. Thus, Brownie, Almond and Country slices, as well as four-pack of luxury fruit tarts, available in “Lemon & White Chocolate” and “Raspberry & White Chocolate” and complete with a new style of packaging, were introduced to Tesco stores in September.