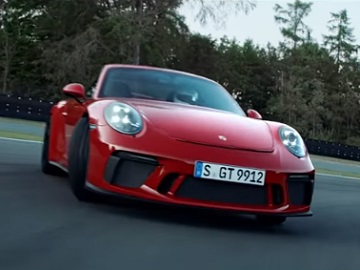 Porsche announces, in a new ad, that the Porsche Taycan is coming. The spot celebrates the unicity of Porche models by saying they all have a soul, which gives drivers a certain feeling as soon as they get behind the wheel and introduces the tagline “Soul, electrified” since the Taycan is the brand’s first purely electric sports car.

“It’s like the wind, some say. Or gravity. You can’t see it, but you know it’s there. You can’t find its button on the dash or its chapter in the owner’s manual, we have no drawings of it, we don’t know how much it weighs, can’t time on the track. Ask ten of our engineers about it and get ten different answers, but there is no debate about its existence. After just one day behind the wheel, it’s the most valuable part of the car. The irreplaceable component, the thing you love more and more with every passing mile, the thing you instantly miss in any other car: the soul.

For reasons mysterious and many, every Porsche ever built has one and always will,” the voiceover says on the 90-second spot, which features several Porsche models and ends with an image of the Taycan’s shape in the dark.
“Our new electric sports car is strong and dependable; it’s a vehicle that can consistently cover long distances and that epitomises freedom”, Oliver Blume, Chairman of the Executive Board of Porsche AG, explained. “Taycan” means the equivalent of “spirited young horse,” according to the automaker, which announced the name for its first purely electric series as part of the “70 years of sports cars” ceremony.

The new Porsche Taycan will boast a maximum range of over 500 km in accordance with the NEDC and will feature two “permanently excited synchronous motors (PSM) with a system output of over 600 hp (440 kW)” designed to accelerate the electric sports car to 100 km/h in well under 3.5 seconds and to 200 km/h in under twelve seconds.

Porsche has also revealed that it plans to invest more than six billion euro in electromobility by 2022, doubling thus the expenditure that the company had originally planned. Money will be used for the development of Taycan variants and derivatives, for electrification and hybridisation of the existing product range, for the expansion of production sites, as well as for new technologies, charging infrastructure and smart mobility.