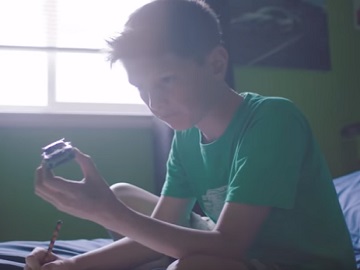 The automaker has released a spot – part of the “Decades of Dreamers” campaign – featuring a 13-year-old boy named Christian who shared, through a letter, his dream of working for Porsche one day and received the most powerful 911 as a reply. The video, titled “A letter returned,” features the kid in his room writing a letter to Porsche, in which he reveals he is a huge fan of the brand’s cars, that he loves the GT2 RS and that he also likes sketching cars and would also like to design cars one day, maybe even for Porsche. “That would be awesome!” he adds, before ending his letter. Christian is then seen riding a bicycle through his town and being followed by a Porsche 911 which he has the chance to ride. “So today was pretty cool, yeah?” he is asked at the end of the day, after a speedy ride. “Yeah, it’s pretty cool,” he replies.

2018 marks seven decades since Porsche was founded. The first vehicle to bear the Porsche name – the 356 “No.1” Roadster – was registered on June 8, 1948. The company began its anniversary year with a New Year Reception and continued with multiple activities around the world. On February 3, “The Porsche Effect” opened at the Petersen Automotive Museum in Los Angeles. In Germany, the event was celebrated with an exhibition called “70 years of the Porsche sports car”, which took place between March 20 and March 31, at “DRIVE, the Volkswagen Group Forum” in Berlin. On June 9, Porsche invited sports car fans to its “Sports Car Together Day” at all of its sites around the world. In the UK, the anniversary was celebrated with the “Festival of Speed”, held from July 12–15, at the Goodwood race track, as will the “Rennsport Reunion” in California from September 27 through September 30. The celebrations will conclude with the “Sound Night” event to be held for the first time in the Porsche Arena in Stuttgart on October 13.