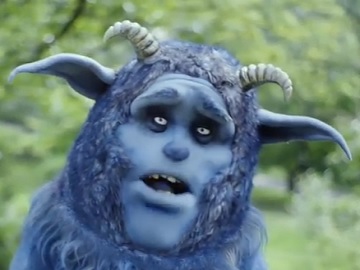 POM Wonderful encourages people to worry less in its new integrated campaign, Worry Monsters, named after the creatures that show up to make their human counterparts anxious.

One of the spots included in the campaign features Jake, a man started to exercise more and drink POM Wonderful after a “health scare” and his Worry Monster, who struggles to keep up with him while out running. “Oh, I’m not made for this. As Jake’s Worry Monster, I was thrilled when he had his health scare. But now he runs and drinks POM and nothing I say makes him worry anymore,” the blue monster says, proving then he’s right by giving Jake some “instructions,” such as “Jake, don’t run too hard, you’re going to chafe!” “You’ll chafe!” he shouts behind Jake, who keeps running, though, ignoring the Worry Monster.

At the end of the spot, the lines “Worry Less. Get Crazy Healthy” flash across the screen, alongside a bottle of POM Wonderful Pomegranate Juice, which is, according to the brand, a good source of potassium (every 8oz serving packs as much as the average banana), is gluten-free, Non-GMO, certified Kosher, and has no added sugar.