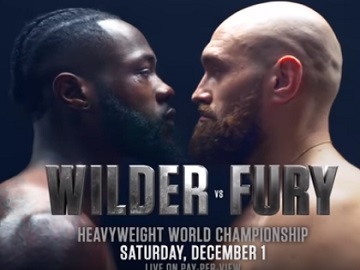 PlayStation has released a commercial, encouraging viewers to pre-order Wilder vs Fury: World Heavyweight Championship and watch the match live on PS4, on December 1st.

The 30-second promo video features the WBC heavyweight champion Deontay Wilder and the former WBA (Super), WBO, IBF, IBO, The Ring, and lineal heavyweight champion Tyson Fury sitting on golden thrones, fighting in the ring and also facing each other from up close, like boxers do, while in the background the 2018 single “You Should See Me In A Crown” by 16-year-old global pop-phenom Billie Eilish is playing.

Wilder will be defending his title at the Staples Center in Los Angeles on Saturday, December 1st, starting from 9 ET/6 PT. A potential match between Wilder and Fury has made the subject of numerous discussions and has been promoted for several years now, including by the two fighters themselves both in internet video interviews on YouTube and on social media. Earlier this year, on 27 June, Fury gave Wilder a message in an Instagram video, asking him to face off and, by August, both Wilder and Fury had agreed to a fight.

The fight, which marks the first heavyweight fight to be pay per view in both the U.S and U.K since Lennox Lewis fought Mike Tyson in 2002, is to be shown live on Showtime pay per view in the US and on BT Sport Box Office in the UK.